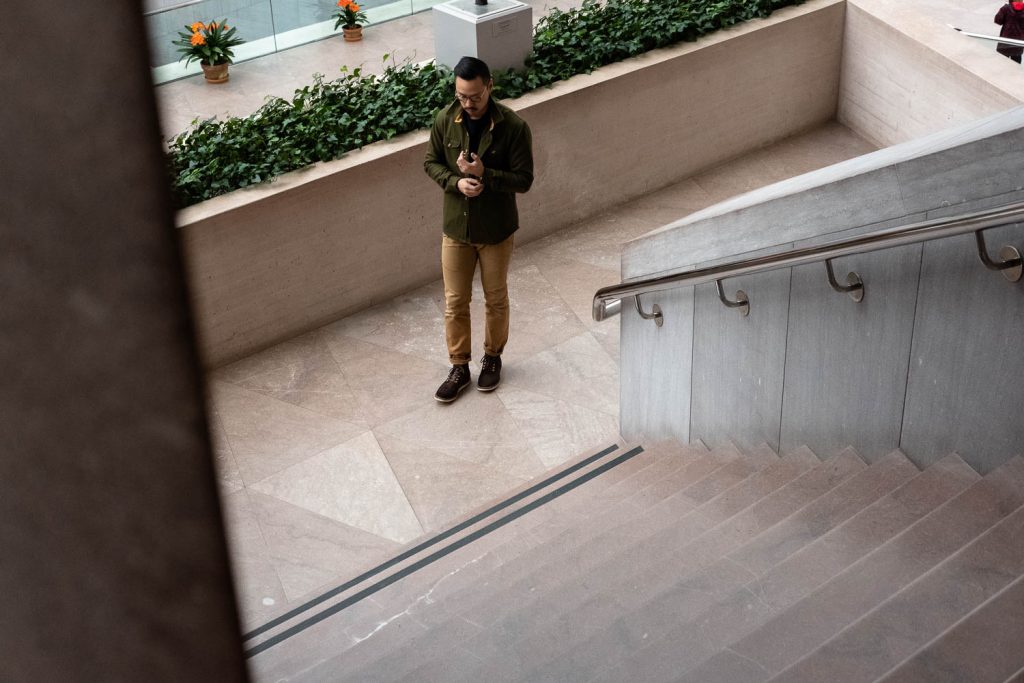 It’s been a hot second since we’ve dropped our last Viberg for Withered Fig, the Mushroom Chamois Roughout 145 Oxford. The response to our first two Vibergs has been huge for us, and we continue to be floored by the support. A big thanks to all of you who support Withered Fig and make this happen.

For this next release, we’re bringing out the second iteration of the Marvington boot (in collaboration with @cuffington and @marvaments), with the Viberg Tobacco Chamois Roughout Service Boot. The pertinent details being:

Seeing how Nate and Mike often reached for a dark brown pair of boots more often than other more exotic colors, both were happy to select the Tobacco Chamois Roughout leather for its versatility and richness in color. The final result is what we’re calling, the Marvington II. 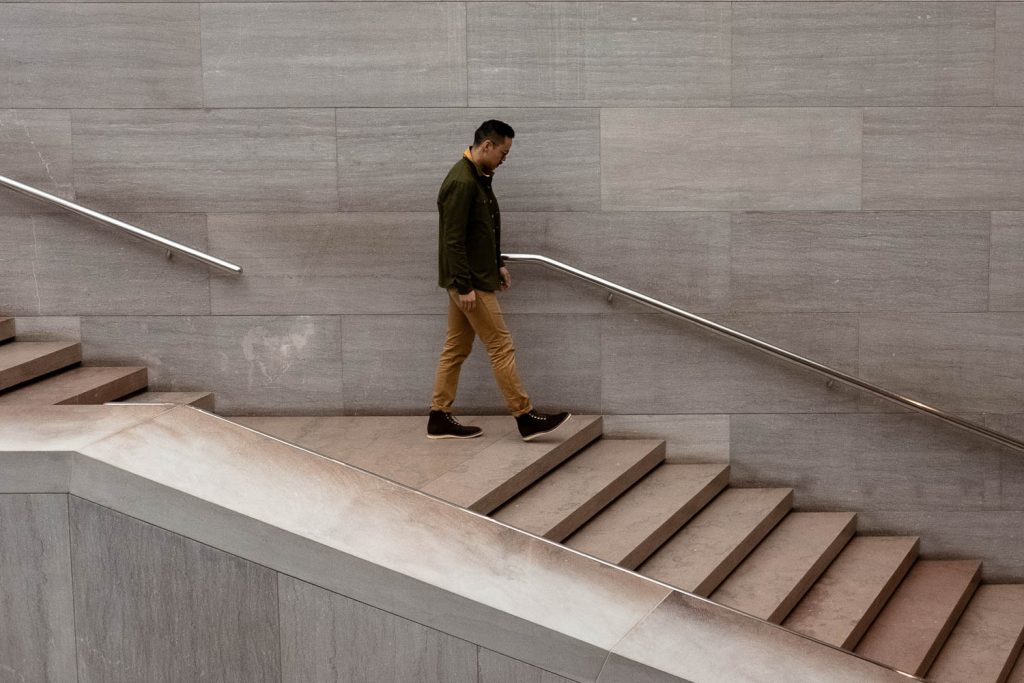 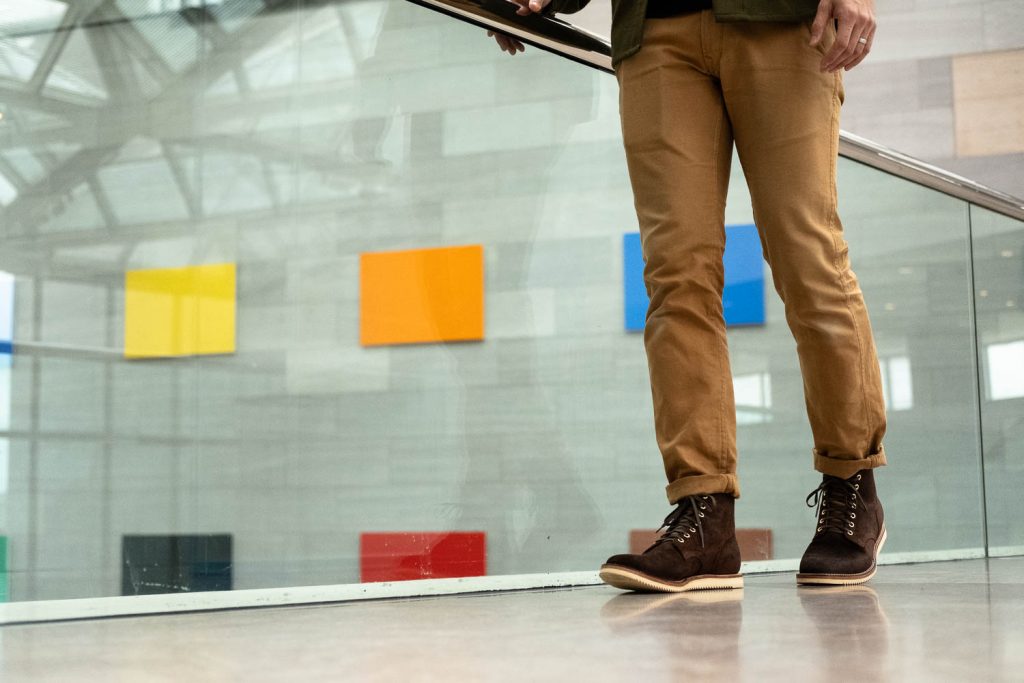 One of the first things your eyes will quickly gravitate towards is the Vibram Mini Ripple sole. The Mini Ripple soles have garnered quite the attention since 3sixteen first debuted them several years ago. While we were tempted to put them on our first Vibergs, we were waiting for just the right leather to put them on. The deep brown Tobacco Chamois leather is nicely contrasted with the Cream Mini Ripple sole, with the natural midsole easing that transition from dark to light.

In between the midsole and the Mini Ripple is a foam composite wedge rather than the 2-ply leather wedge you might see on other Mini Ripple boots (a la 3sixteen). While we certainly love that double-stack look, we wanted to try out something a little different, and more along the lines of the original Marvington with a taller and thicker composite sole. For our purposes, we found that this kept the sleek look of the Mini Ripple while adding a bit more balance to the overall aesthetic by keeping the eyes focused on just the Tobacco Chamois upper and the Mini Ripple sole, rather than add in that third dimension of the stacked leather midsole. This choice not only makes the boot lighter in weight, but also (subjectively) more comfortable than the double-stacked leather heel. When it comes to boots and footwear in general, we like to think that if it fits right and is comfortable, then you will feel more comfortable in the boots, which ultimately speaks to your style. Having worn these for the last week, wearers of the Marvington II boot will find that it feels much lower to the ground than the first Marvington with the 2060 sole. Comparatively, the Mini Ripple has less bounce on each step, but there’s a firm but grippy feel that still comes across as quite comfortable as your strike the ground. Hard to describe, but you’ll know once it’s on your feet. 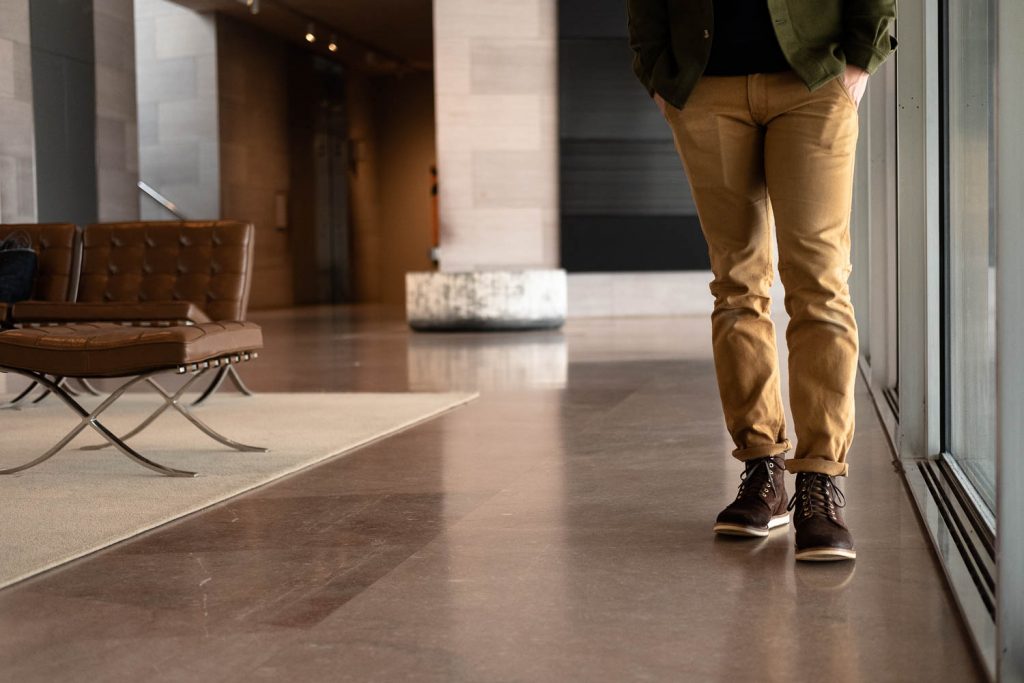 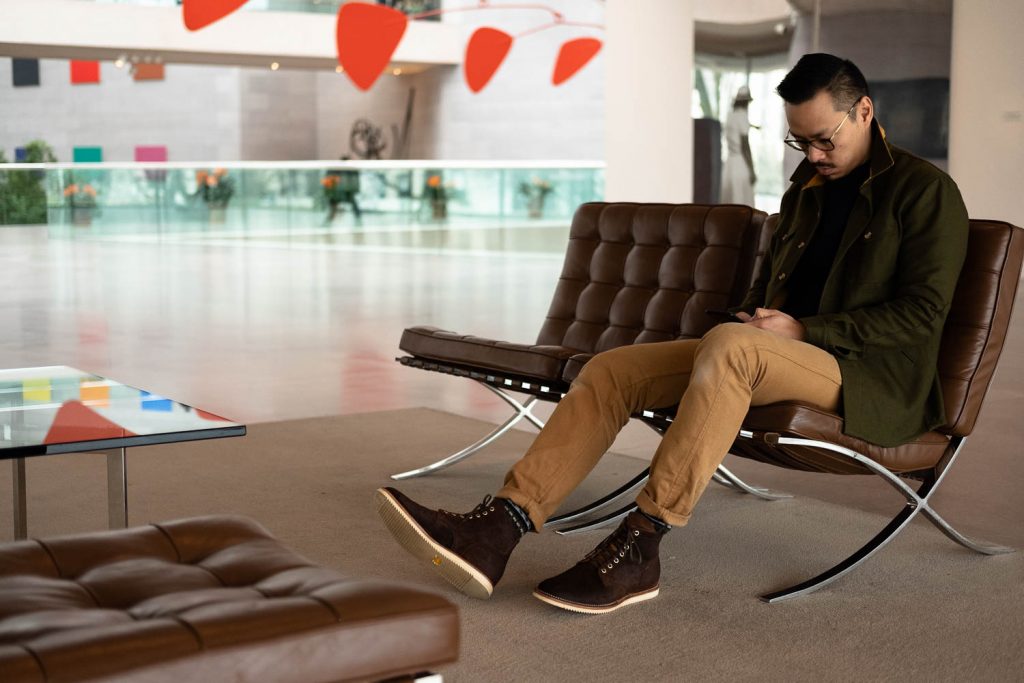 Beyond the sole, the other marker that is worth highlighting is the Natural Chromexcel leather tongue. As with our previous two Vibergs, we opted to mix up the tongue to a completely different leather, rather than utilizing the same leather on both the upper and the tongue. We find that this contrast – or in this case more of a tonal variation – tongue creates a visually appealing break in the overall look. The appearance comes across as that of dark chocolate and milk chocolate, with the Tobacco Chamois Roughout leather representing the dark chocolate, and the Natural Chromexcel leather representing the milk chocolate. It’s a nice combination of two hues of browns; and a small, but distinct look that can be easy to overlook to the untrained eye. 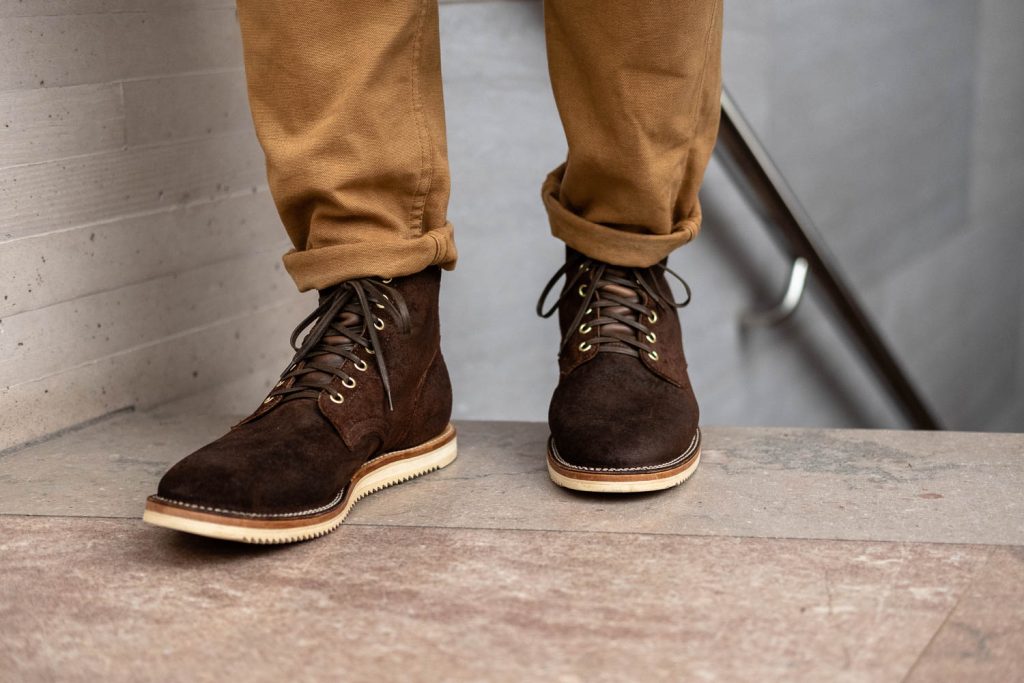 The two details that complete this Withered Fig make-up are the roughout leather and the 1035 last. We’re happy to continue servicing the 1035 community, as well as those who have yet to experience the glory of having that additional width in the toebox. While it isn’t for everyone, we find that the 1035 last is the perfect balance of a sleek, yet comfortable last.

Finally, we’ll wrap up with some of Nate and Mike’s thoughts in regards to Marvington II. In all honesty, it doesn’t take much for all three of us to get our heads together and come up with a make-up. I think when the details and aesthetics just click, everyone sees it.

After the warm reception from the original ‘Marvington’ makeup, it was nice to see that the more robust 1035 last was well-received. For the second iteration, Richard, Nate, and I hoped to continue on with the same principles that guided us – comfort without sacrificing visual appeal. We found our answer with another vibram product, the distinctive mini-ripple sole. After wearing the first ‘Marvington’ boot, I really appreciated the way rough-out took on wear, but was hoping for an additional weatherproofing measure. The answer for us was found with the reverse tobacco chamois. The waxed nature of the rough-out leather provides that extra protection against inclement weather. Again we went ahead with a plain toe design for more casual wear, and with wear the rough-out shaggy nap will eventually come through. I personally paired this boot again with raw leather laces, and the subtle contrast from the natural chromexcel tongue ties it all together.
– Mike (@marvaments)

Same but Different. For the 2nd iteration of the Marvington Boot, we pretty much did the opposite of Marvington I – while preserving the signature look of the roughout leather / contrasting tongue combination, we went for a darker tobacco chamois RO leather upper and a light Natural CXL tongue (vs light upper/dark tongue). Instead of a nice beefy sole, we went for the sleek yet rugged mini-ripple sole. I love the shiny brass hardware because it provides a nice bright eye-catching accent and compliments the dark tobacco chamois roughout leather so well. Paired with flat waxed or raw leather laces, the Marvington II is a versatile boot that can be worn easily with denim or chinos.
– Nate (@cuffington)

Releasing Friday, March 8th at Noon EST on Withered Fig. For sizing information, we have updated our recommendations on sizing on our Measuring Guide page (click the Boots button), as well as the product pages for our previous Viberg boots, where we provide reference sizing (click on the Size Chart tab). You can find the Marvington II available here on our website. 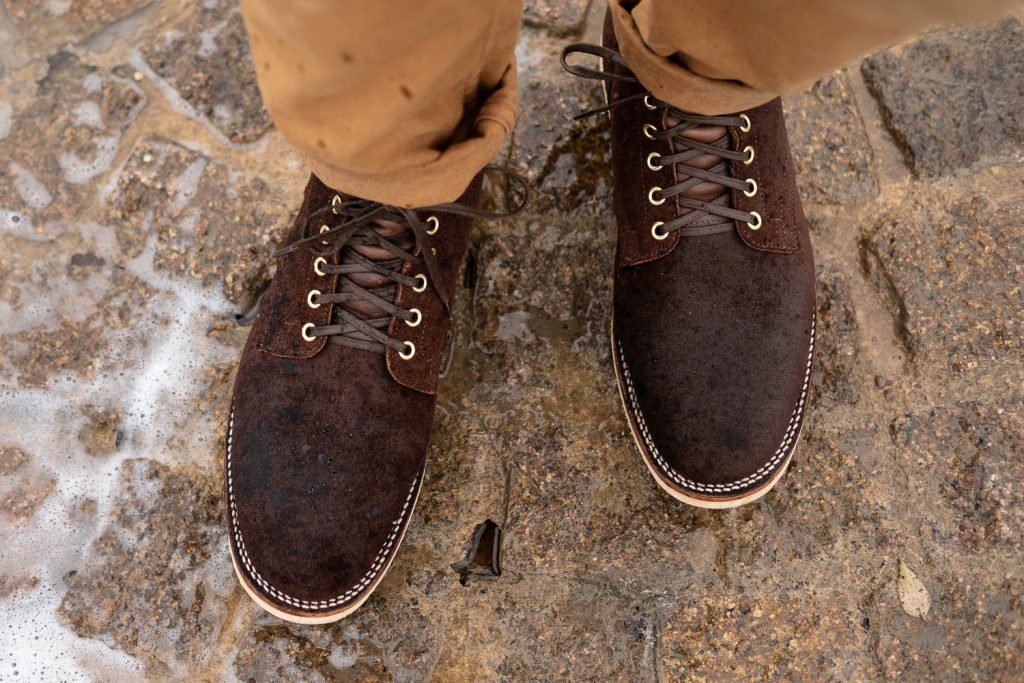 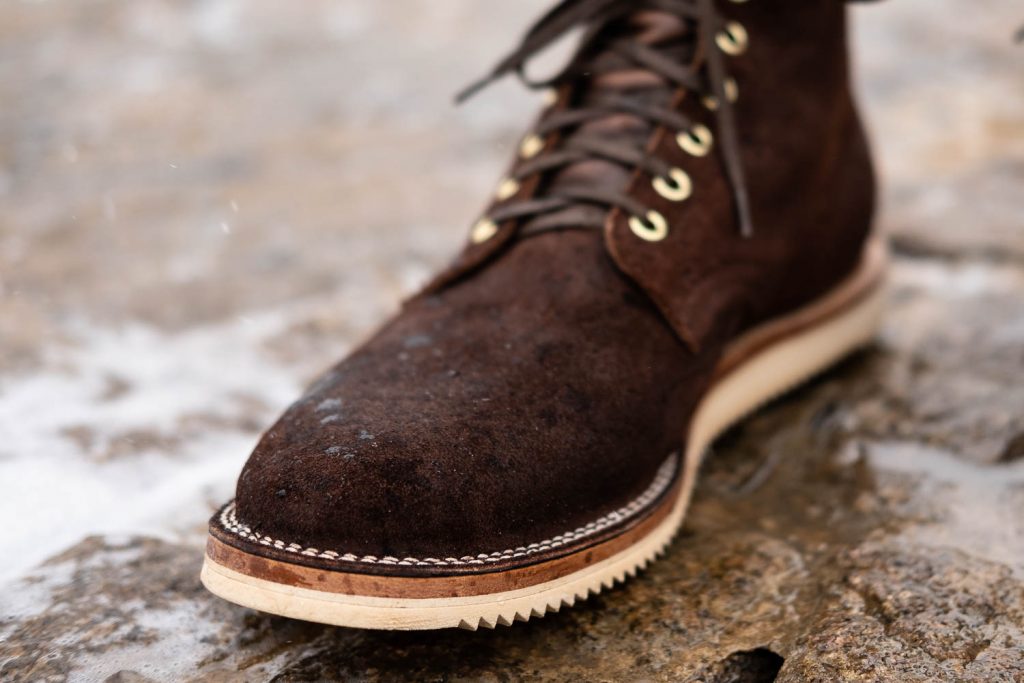 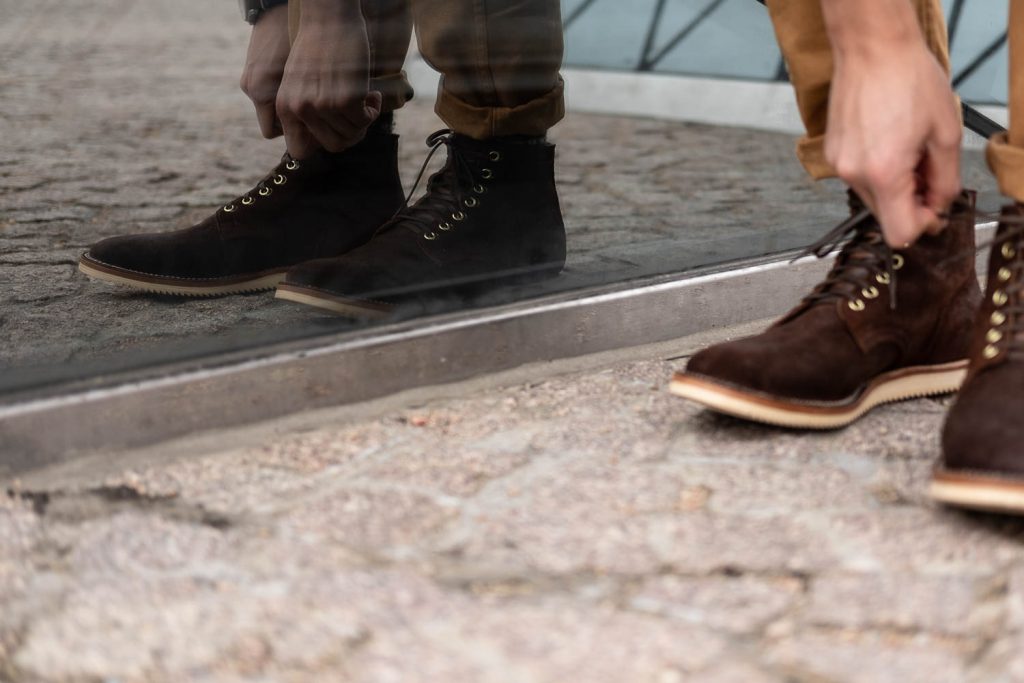