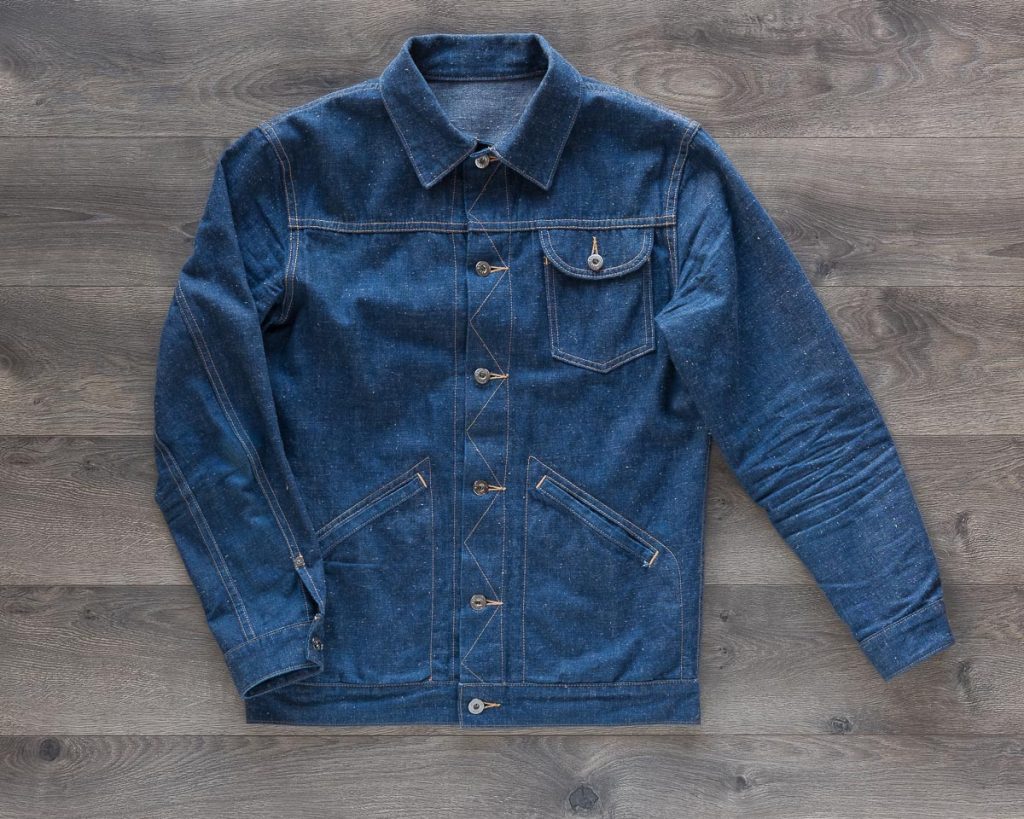 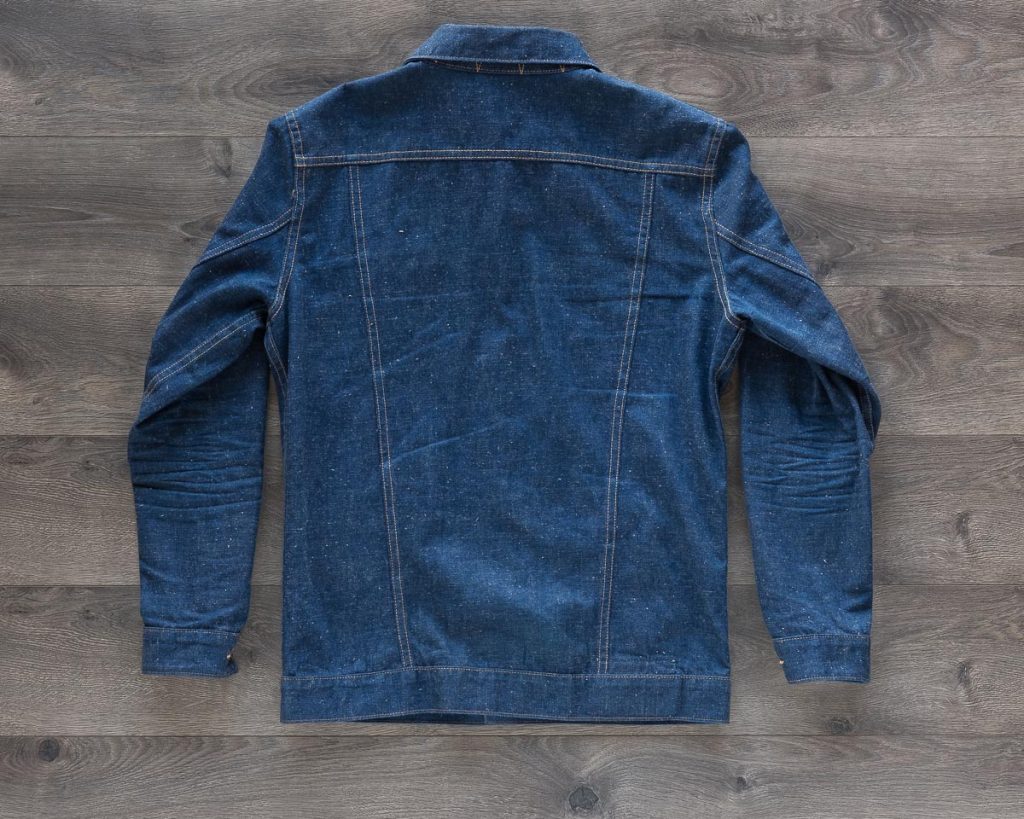 
The 3sixteen Indigo Nep Ranch Jacket is a relative newcomer to the denim jacket game, but it’s one that has found its place nicely alongside 3sixteen’s ever popular Type 3s Denim Jacket. The best part about it is that it’s here to stay as one of their yearly offerings rather than a seasonal one-and-done. From time to time, we want to highlight and showcase some of the garments we proudly carry to show how they wear over time, in a series we simply call Worn. Not only so you have a better idea of what to expect as you wear in your clothes, but also to have a larger space for us to go into what makes each piece unique and interesting.

For our first Worn, we wanted to review the 3sixteen Indigo Nep Ranch Jacket after nine months of wear, and highlight the fades and extra nep. We love the fact that although it is a lighter jacket, it can be worn all-season. I wore it numerous times throughout this past summer, mostly in the evenings when temperatures slightly drop. It’s not that you actually need a light jacket because it’s that cold outside, but rather you just want something to put an accent on your evening attire. As this is our first update on the Ranch Jacket, we also provide some general thoughts on styling and fit, in addition to how the fabric and overall jacket has fared over the last nine months.

For those who are new to 3sixteen or just want to hear about some of the inspiration for this Ranch Jacket, check out our 3sixteen Brand Spotlights: Part 1 and Part 2. 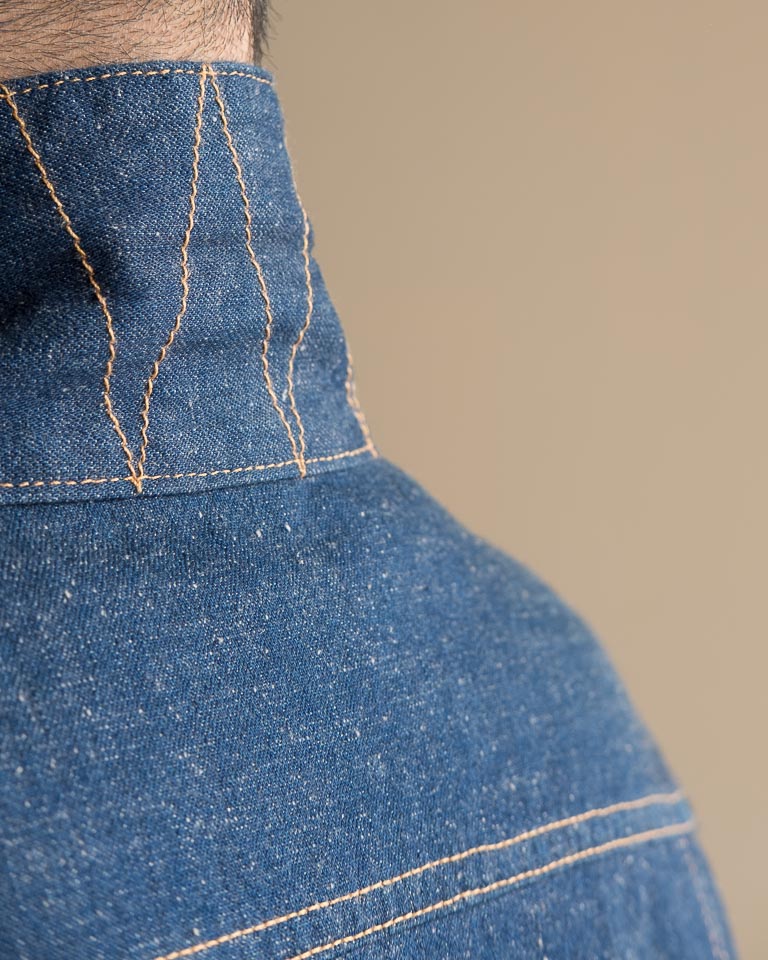 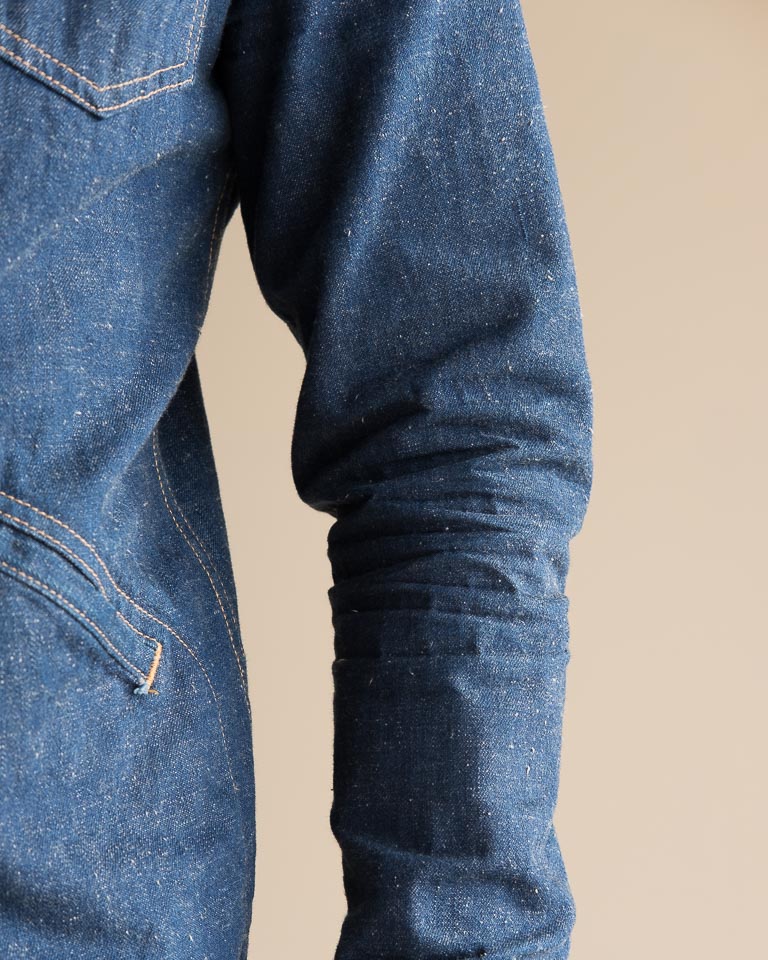 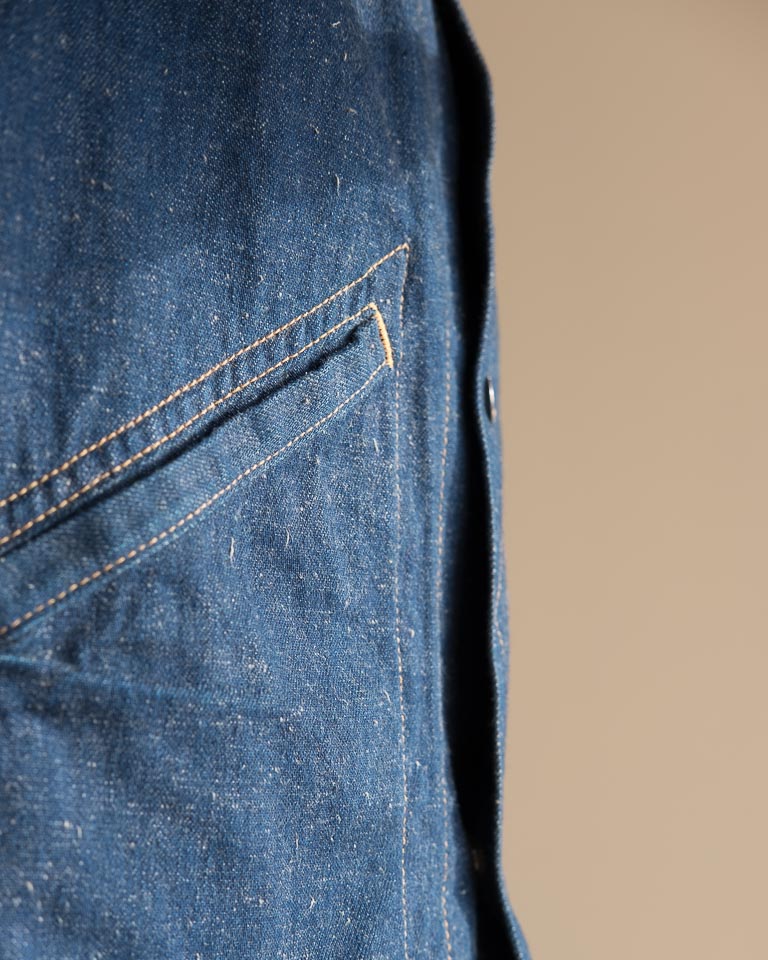 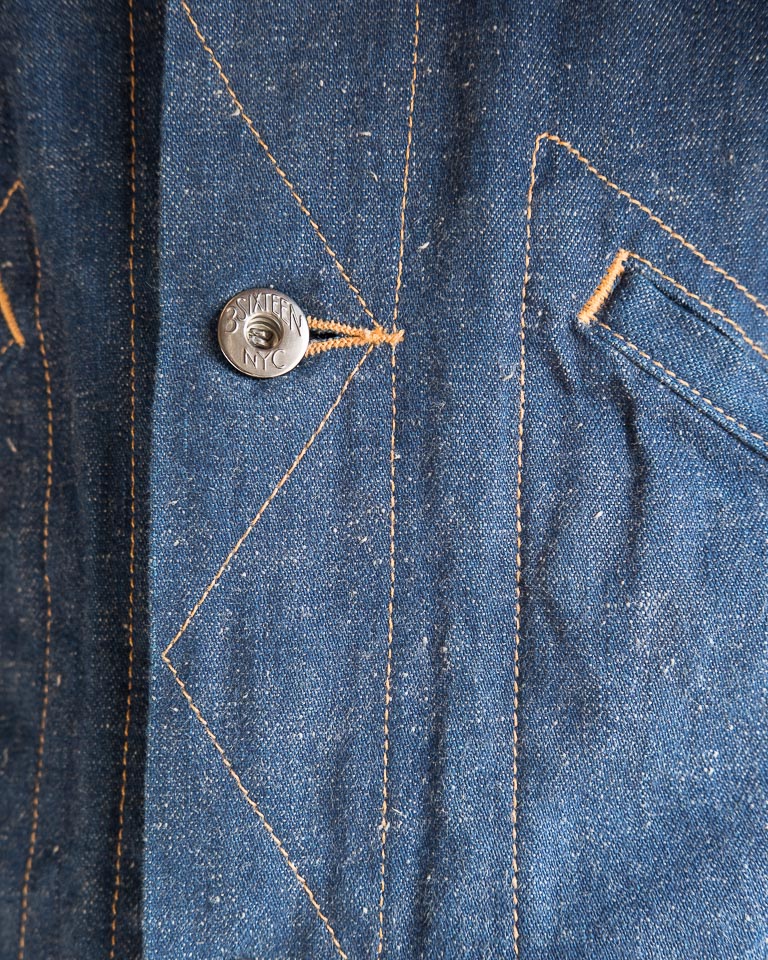 To start off, I’ll address the denim-on-denim predicament that some of us more timid folks face. To be honest, it took me quite some time to come around to wearing a denim jacket – they just never really appealed to me like a pair of denim jeans did. I’ve been into raw denim since around 2008, but only bought my first denim jacket – this ranch jacket – in February 2017, almost a decade after I first got interested in raw denim. The obvious solution to the denim-on-denim aka Canadian tuxedo problem, is to just not do it. It’s a personal style choice, and I typically prefer going with some trousers or khakis if I’m wearing a denim jacket. But if I’m already wearing denim on the bottom and need to throw on a jacket, I won’t hesitate to grab the ranch jacket.

Most of my favorite outfits with the ranch jacket have simply been some trousers/jeans with a plain tee on top (you can find some examples on my IG @doppki). The jacket helps break up what is mostly a two-tone or two-piece outfit, and into a three-tone/three-piece outfit. If you know just a tiny bit about three, you’ll know that for some reason it’s just a visually appealing combination (think of the rule of thirds in photography). And so that means I tend to leave the jacket un-buttoned to have that three-piece look, rather than buttoned as if I’m wearing it more like a shirt.

In the winter, the jacket weight is a tad too light to do a simple one-two punch of a tee and jacket. However, you might be able to do with it with a heavyweight sweatshirt. As a result, I tend to simply increase the weight and warmth of the bottom layer and swap out the lighter tee underneath with a heavier piece, like a sweatshirt.

I actually went against the general sizing recommendations and suggestions of most folks and opted to size up one from my regular 3sixteen size (which is a Medium). I initially tried on a Medium and found it to be a little too tight and constricting across the chest/stomach. But, more importantly I wanted something that was longer in length, both in the sleeves and overall jacket length. Going up to a Large, the jacket draped much more nicely across the chest and down the stomach; however, I did find the shoulders to be a tad long. Nevertheless, I felt like going with the Large would afford me the opportunity to layer with something heavier than a tee, and so that’s what I ended up doing. You can get an idea of how the Medium and Large fit when the jacket was still crisp here (M) and here (L).

Because I wanted to maintain that slim-not-skin fit, I did an initial hot soak after I first got the Large to take some of the extra fabric out. Over time, the fabric softens up and stretches back out a bit. When that happens, I tend to do another hot soak just to crisp it up again and tighten up the jacket, even just for a few wears. I don’t have any regrets going with the Large, but I think that was mainly due to my height (6’0’) and slightly larger chest for my weight (175 lbs). Had I been maybe 5-10 lbs lighter and a couple inches shorter, Medium would definitely be the winner for me; and for most folks, going TTS is probably the right choice as well, with the exception if you prefer a longer length or have a larger upper body or have an athletic body type. One last thing I’ll mention is that the arm/sleeve width in the forearm can be a bit tight if you tend to do a lot of forearm workouts. 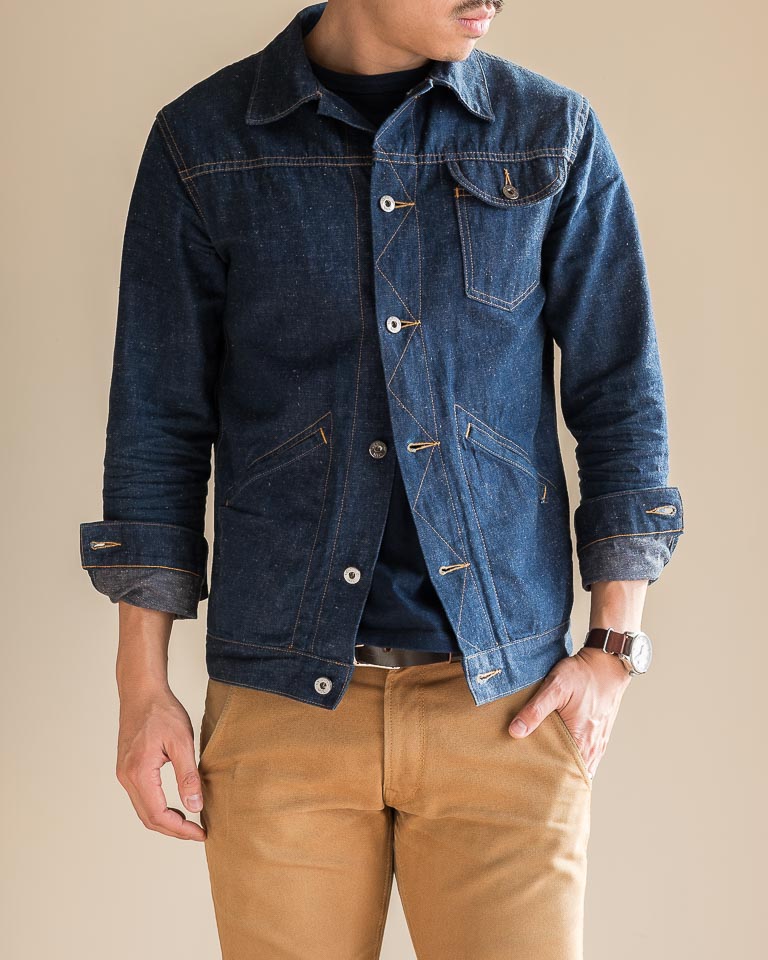 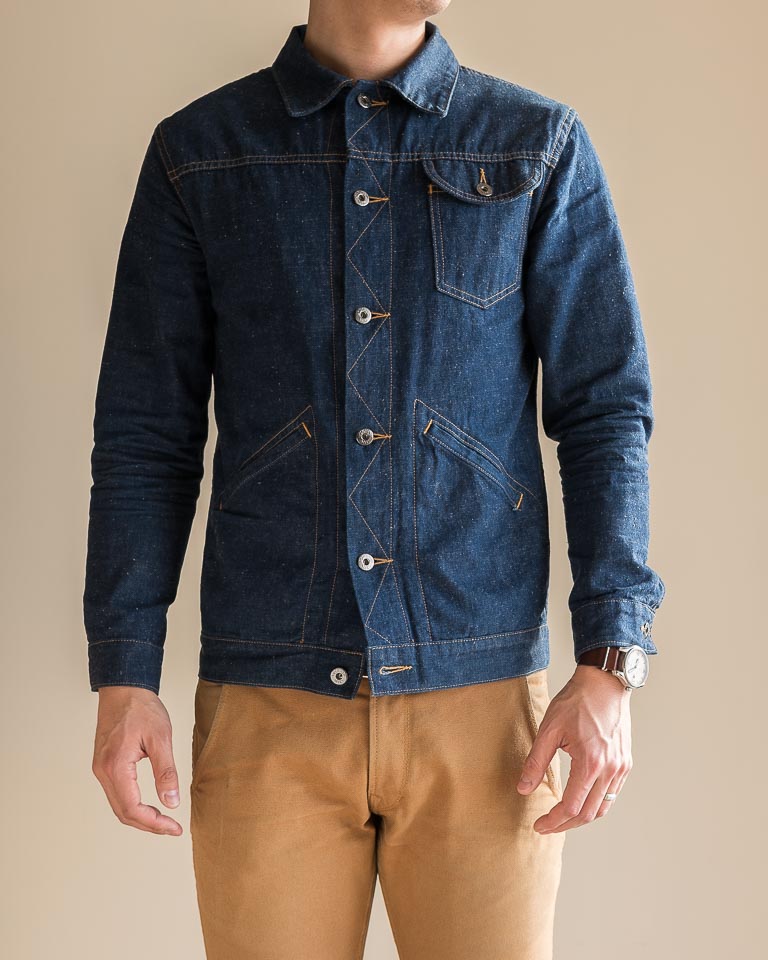 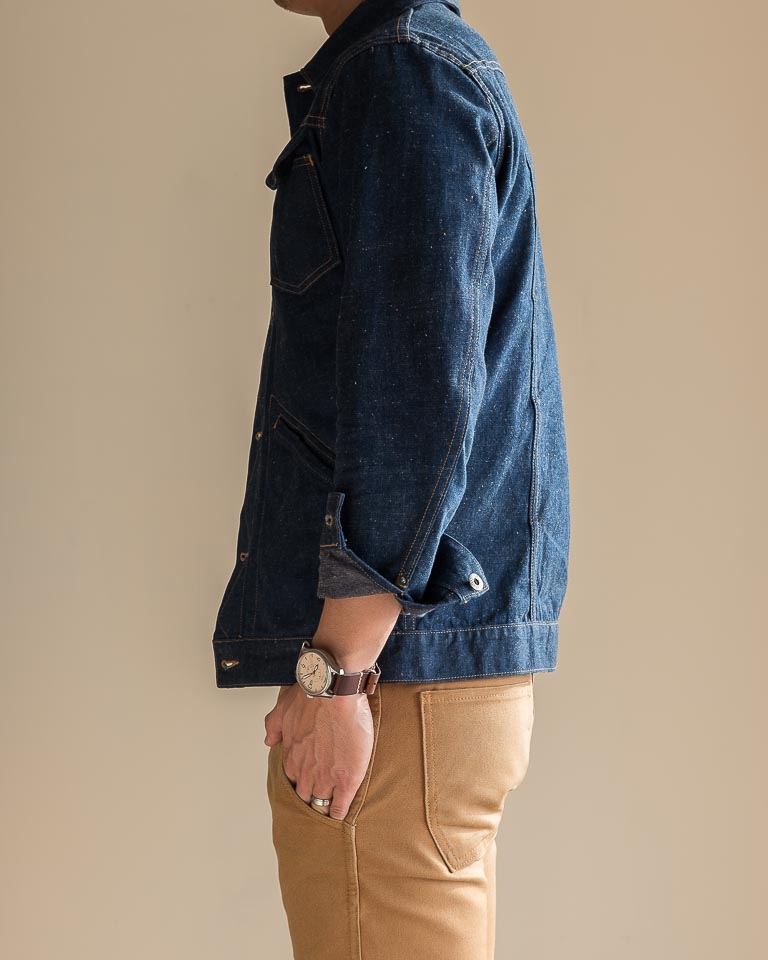 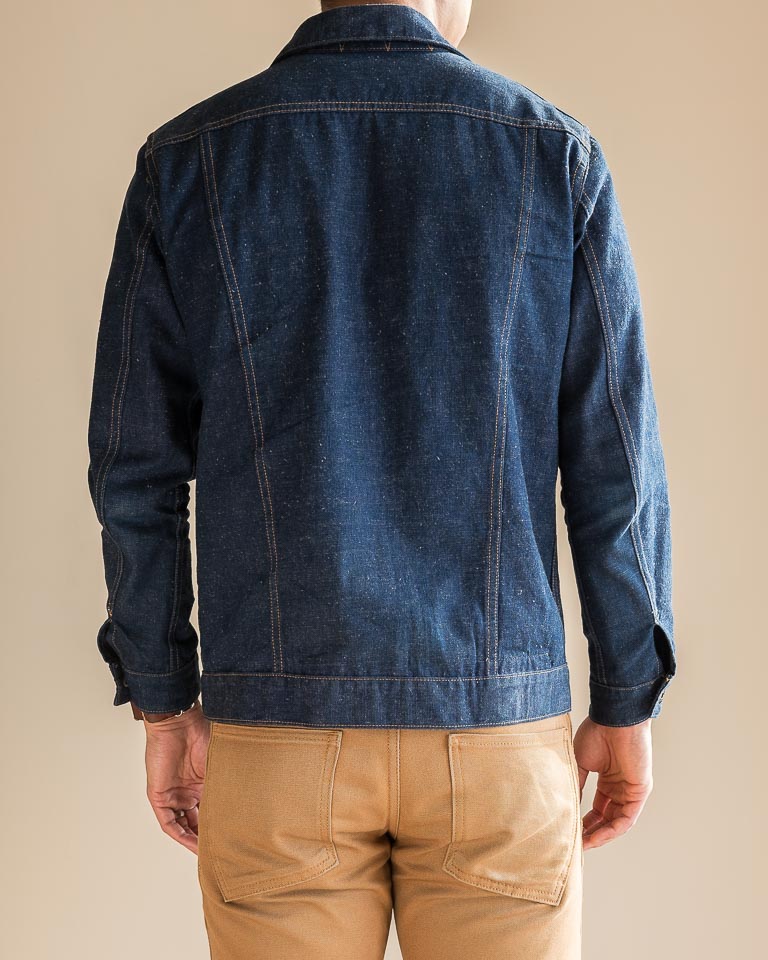 The fabric is really where this jacket shines, from color to texture. As the name suggests, the fabric is quite neppy. Simply put, I think of neppy as hairy. Alternatively, you might see neppy denim and think, “man, that denim has a lot of lint on it!” More formally, it’s fabric that has pieces of cotton/yarn that stick out in an irregular pattern (not to be confused with slub). The overall look of the fabric has a pretty even balance of vertical and horizontal streaking, with the horizontal streaking being slightly more visible. However, the jacket comes across as a nicely balanced fabric that isn’t too in your face as far as the texture and nep, but much more loud in terms of the shade of indigo. Loud might be a misnomer, but it’s a blue that I think will catch people’s attention more so than a black or dark indigo denim jacket. 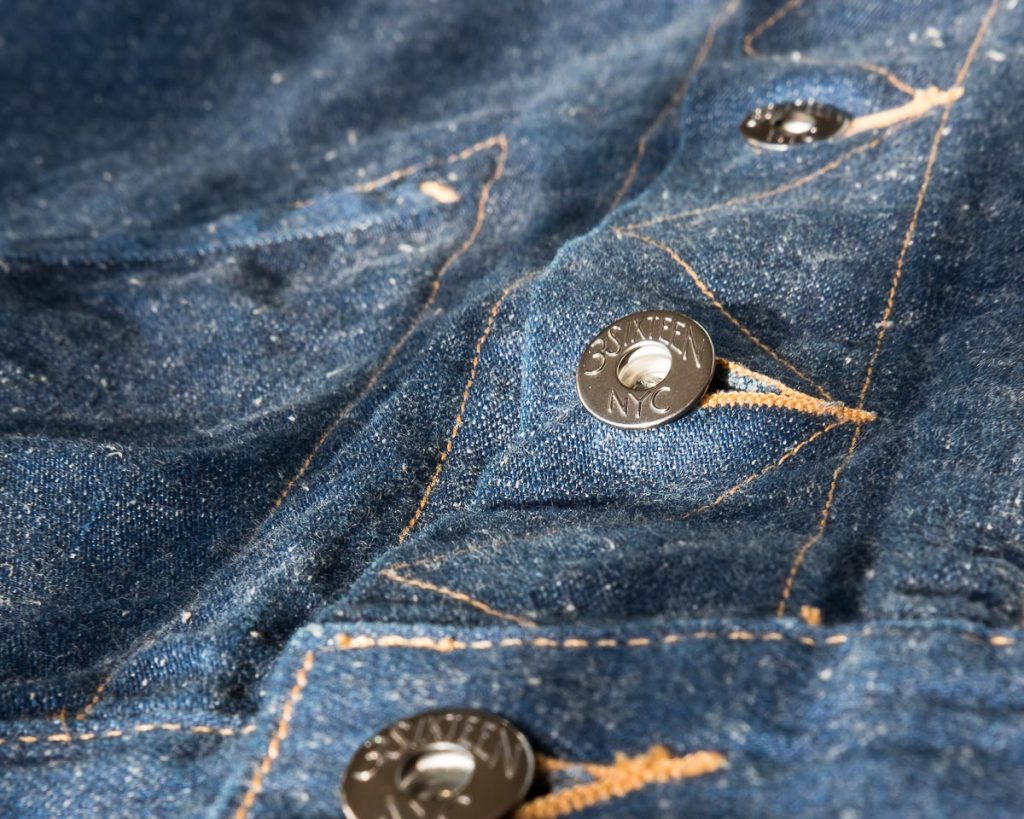 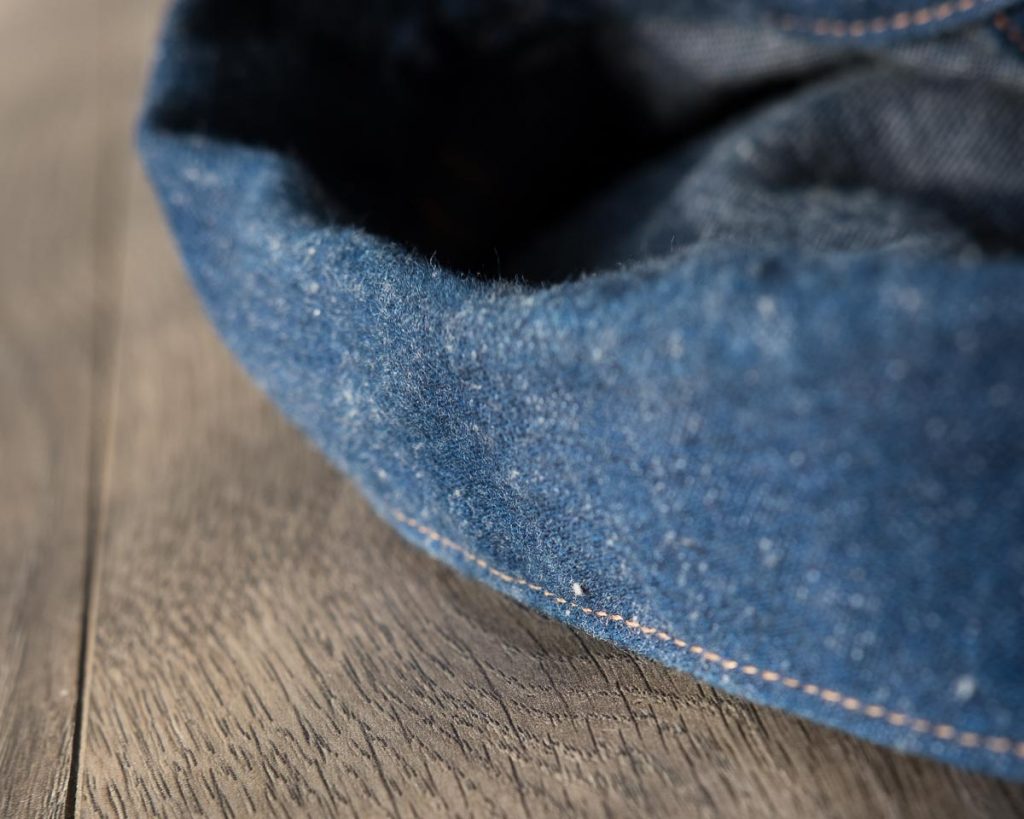 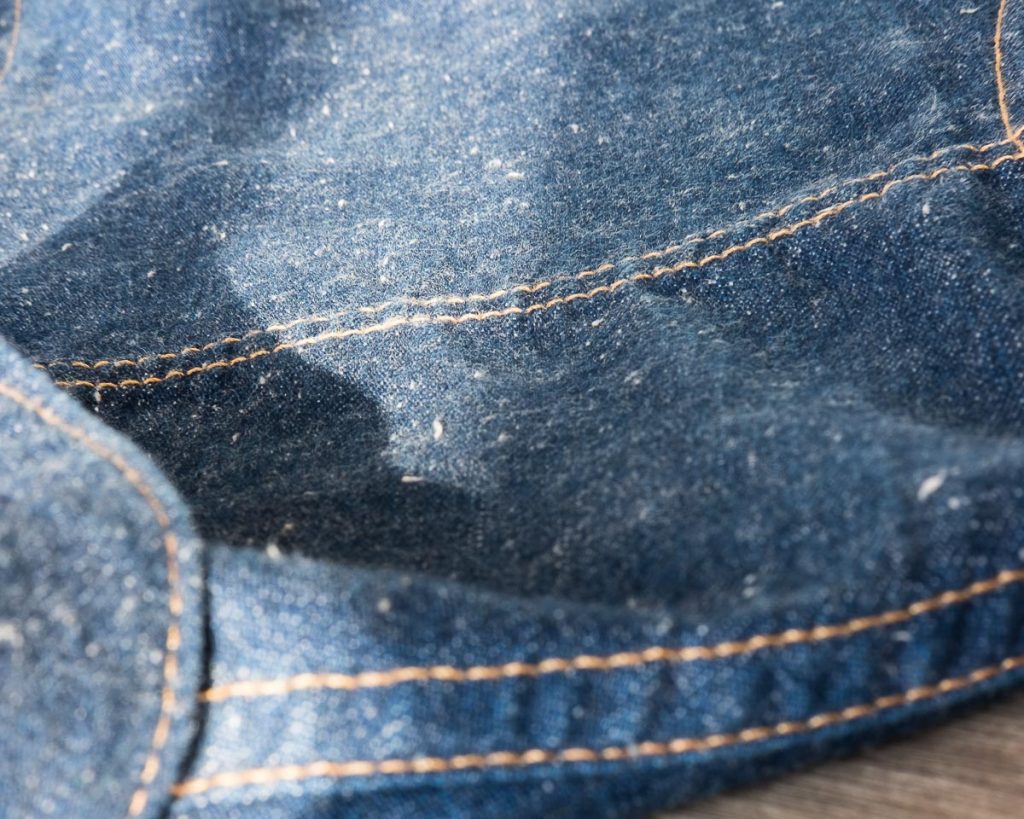 Having owned this piece for about nine months, I can say that the changes have been subtle, but really interesting to see. The jacket has been hot soaked three times – once at the beginning, another at the one-month mark, and another at around the six-month mark. There really was no rhyme or reason that I did so at these intervals; it was purely just having the time to do it, plus wanting to do it for the tighter fit. As you’ll see below, the jacket starts out in a much more muted and desaturated shade of indigo. After nine months it’s almost as if the blue has shed some of its timidness and the vibrant indigo underneath finally begins to unveil and reveal itself. Don’t get me wrong, I sort of enjoyed that muted turquoise-indigo in its virgin state. But the jacket will do what it does, regardless of how I feel. 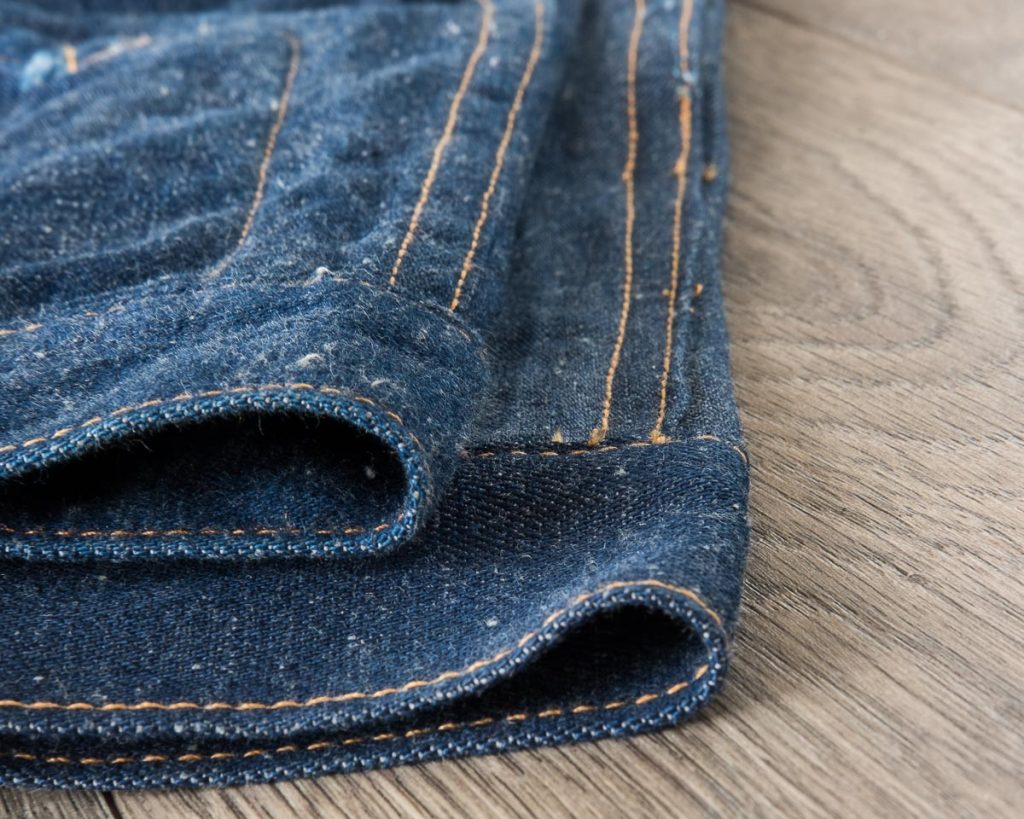 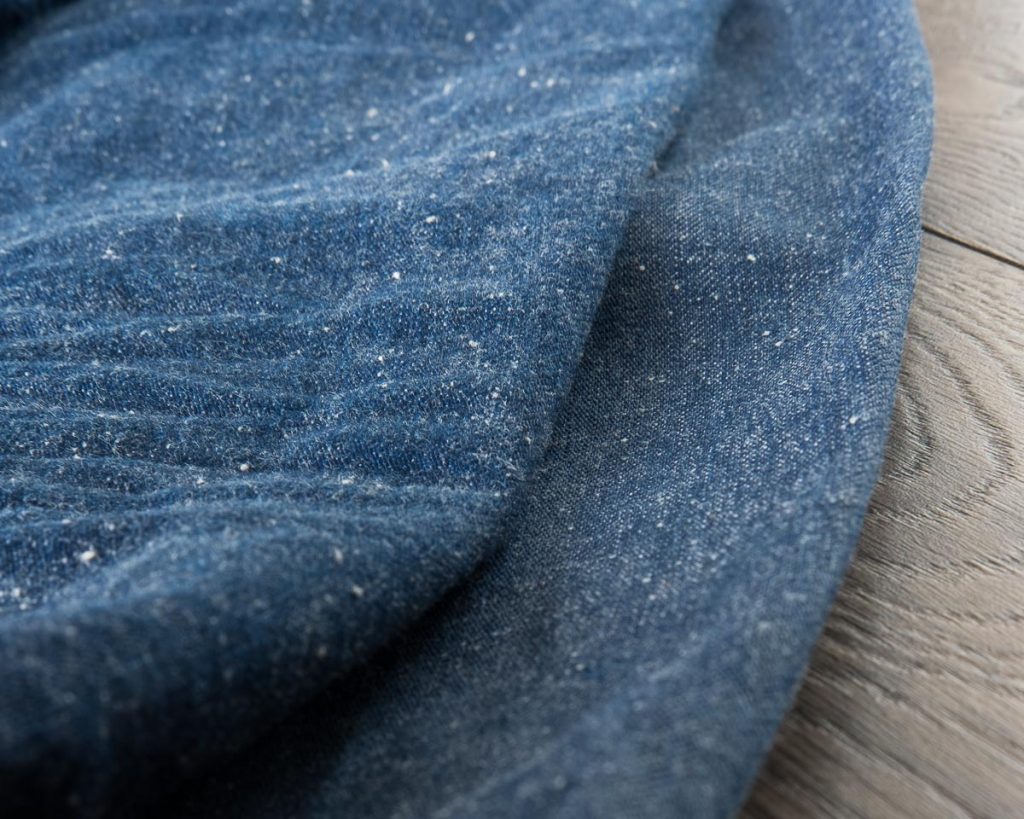 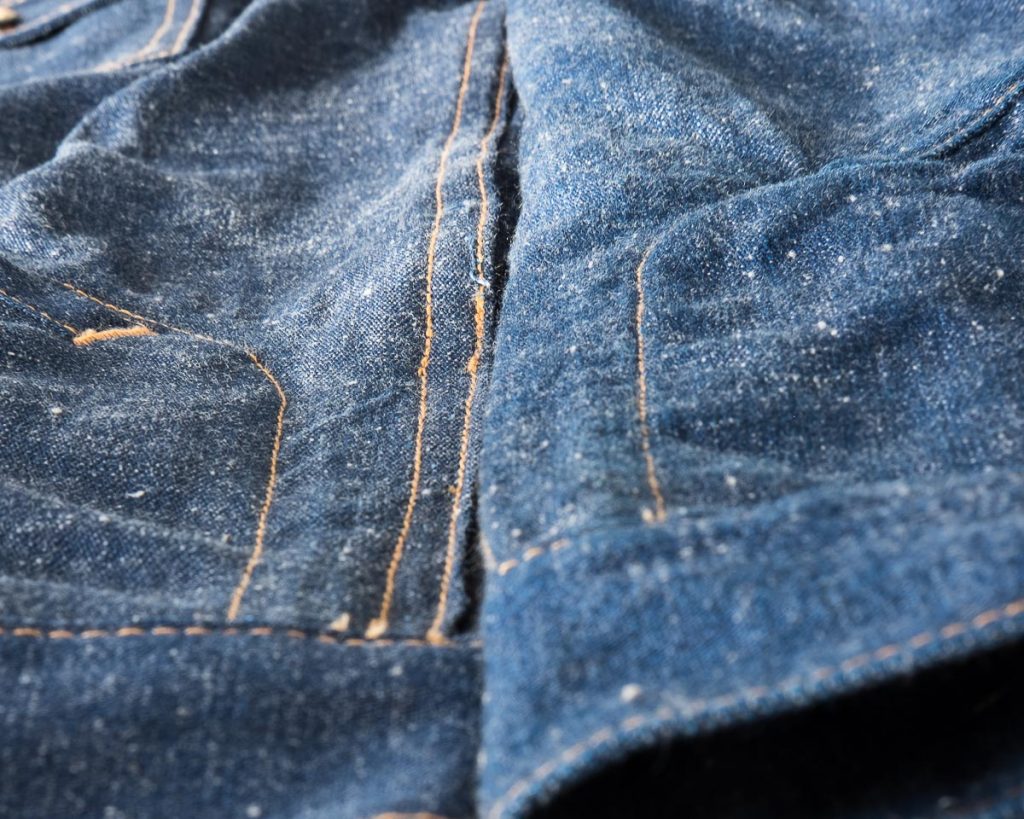 
On the fades, other than the overall hue changing, the distinct fades have been slow to come by. The high stress areas are the elbows and the armpits where you’ll get some combing and bunching in the fabric, and in direct sunlight you’ll see some fades there. One area that foreshadows what is likely to come is the top of the collar where my neck and bottom of my head rubs against the top. It’s probably the brightest/lightest indigo on the whole jacket; still subtle, but it tells me the jacket still has some changes to go through in terms of overall indigo shade, before hitting the point where the indigo drops off and the underlying white yarn begins to appear. 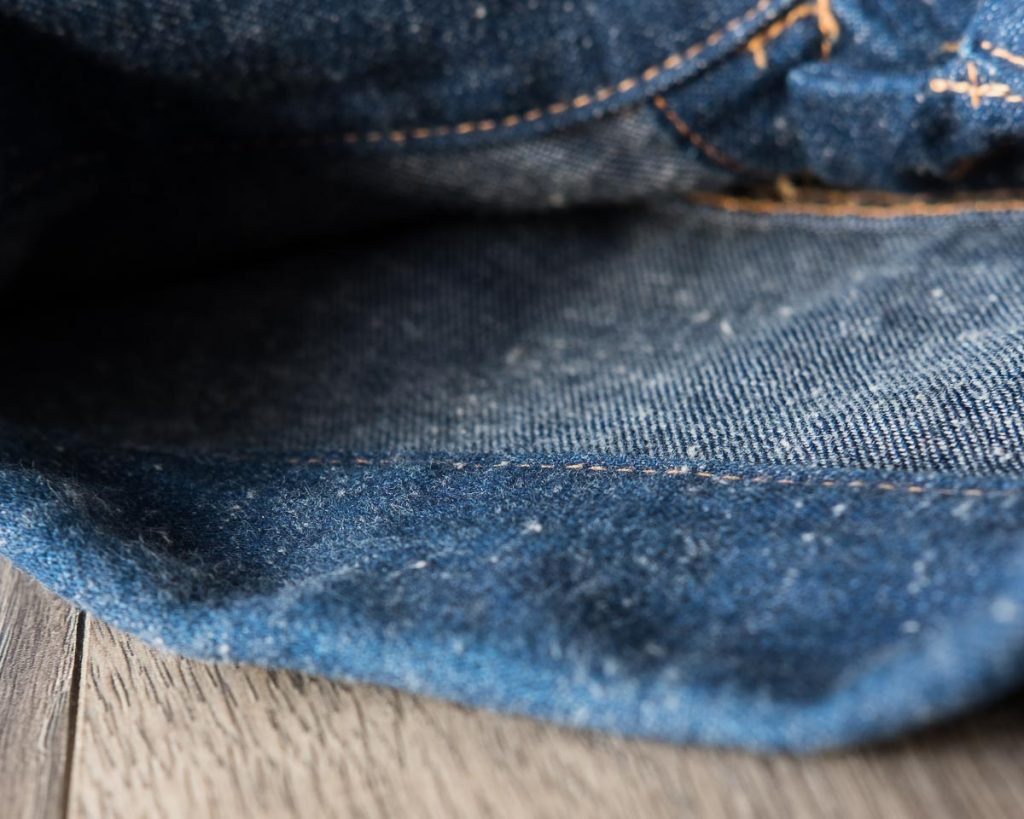 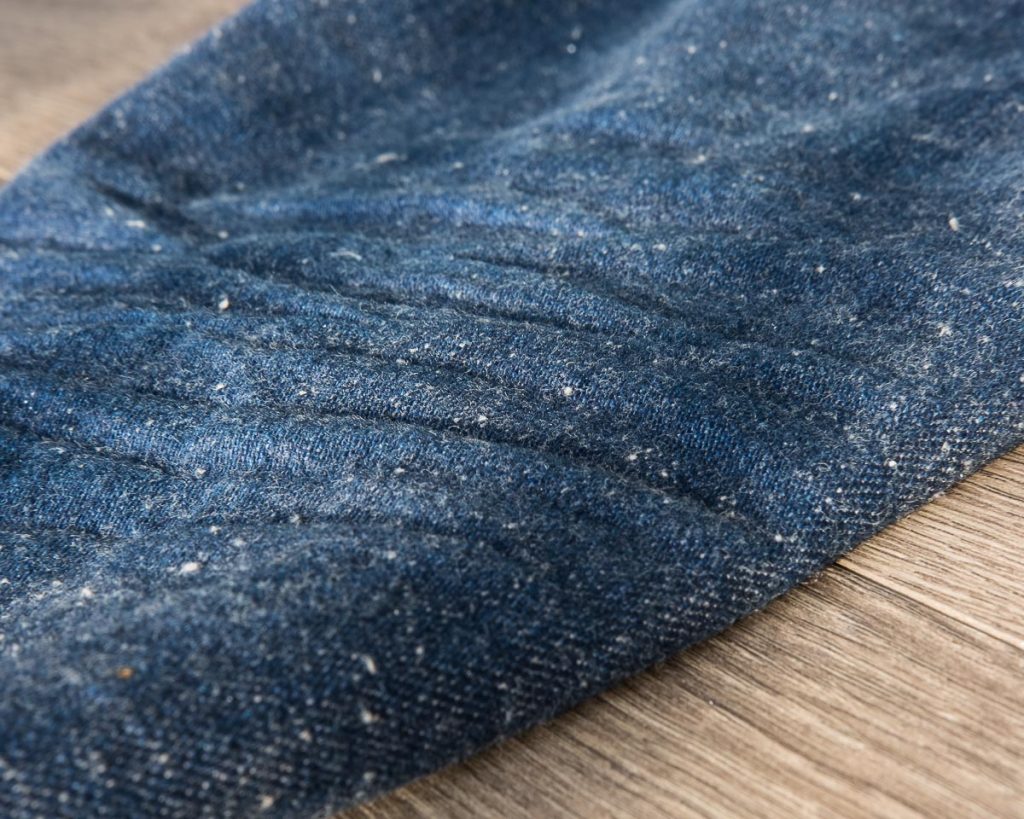 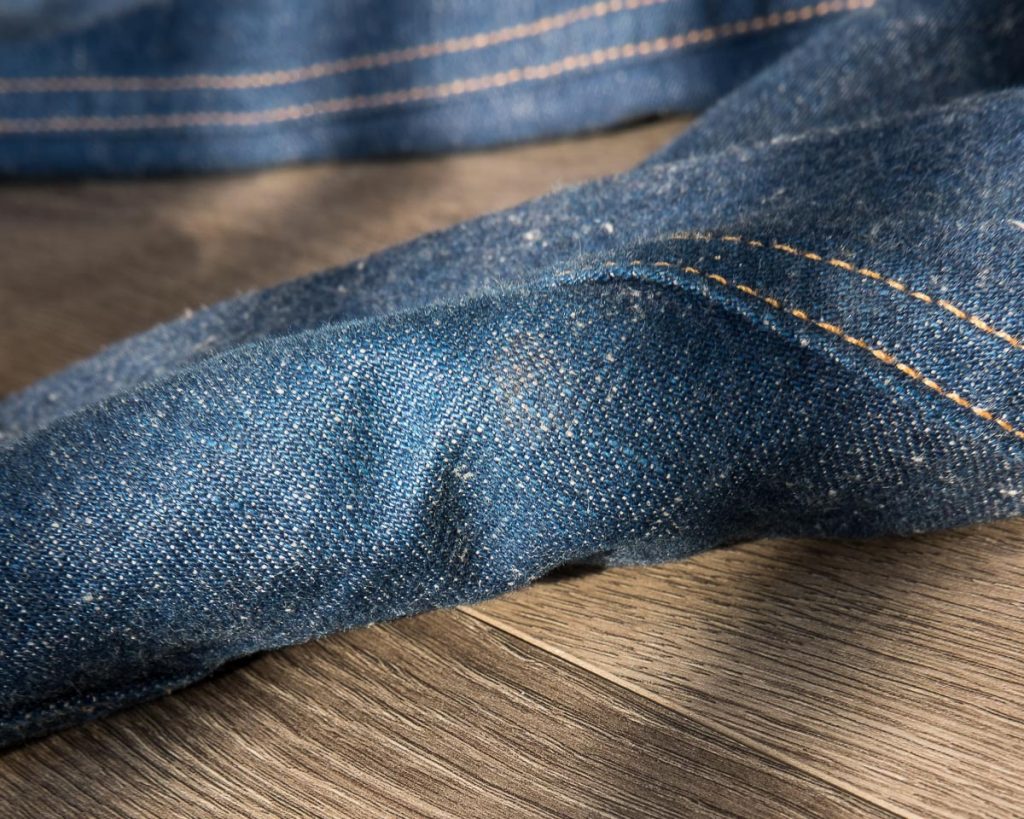 
The neppy-ness has also come out to play, with the nep yarns being more obvious and hairy than its initial state. Instead of discrete small yarns sticking out, it’s more like discombobulated blobs of yarn – much larger and opened up. But again, these are things you’ll really only notice when you’re looking at it close-up or in a macro shot.

Lastly, as customary with most 3sixteen’s jackets is a custom Tanner Goods leather patch on the inside near your back-right side of the jacket.  It’s softened up quite a bit and has darkened as you would naturally expect. Leather patina evolution photos are always a must! 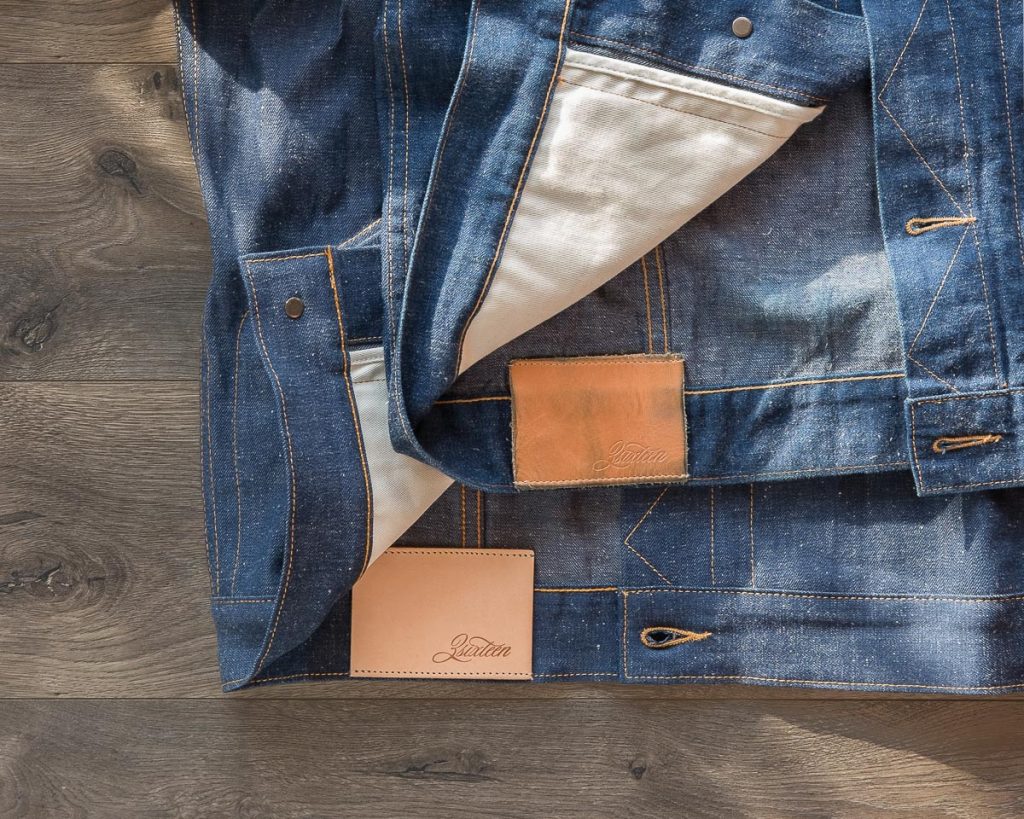 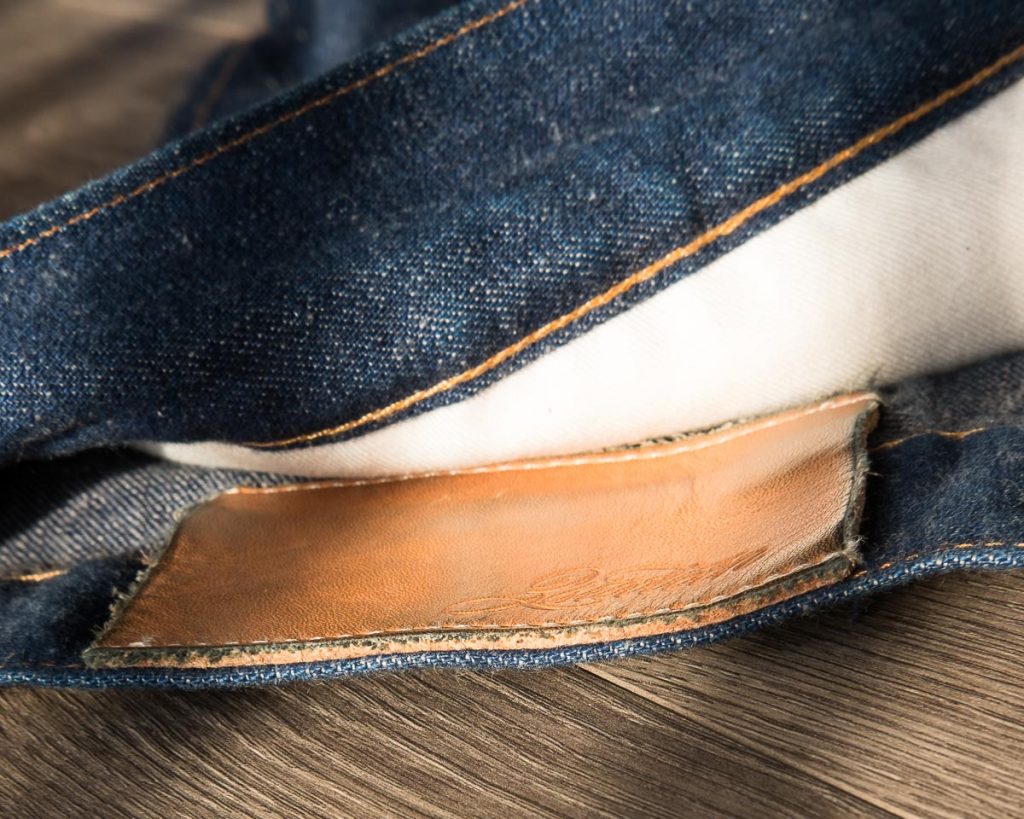 
As it stands now, I’ll probably be giving it another hot soak soon to tighten up the fabric once more. I tend to like the starchy/crisp feel of the jacket when it’s freshly dried as well, but that’s just a personal preference. It’ll be interesting to see how the indigo continues to saturate some more, and how long it will take before the jacket begins to shed the indigo in lieu of the inner white core. Unfortunately as the colder weather takes it’s hold in the D.C./Virginia area, I’ll probably want to reach for the heavier Type 3s more often than not, although I can certainly continue to just layer with a heavier sweatshirt underneath. After all, I did size up to a L for some layering!

The 3sixteen Indigo Nep Ranch Jacket is available at our store here. If your size is out of stock, send us an e-mail!